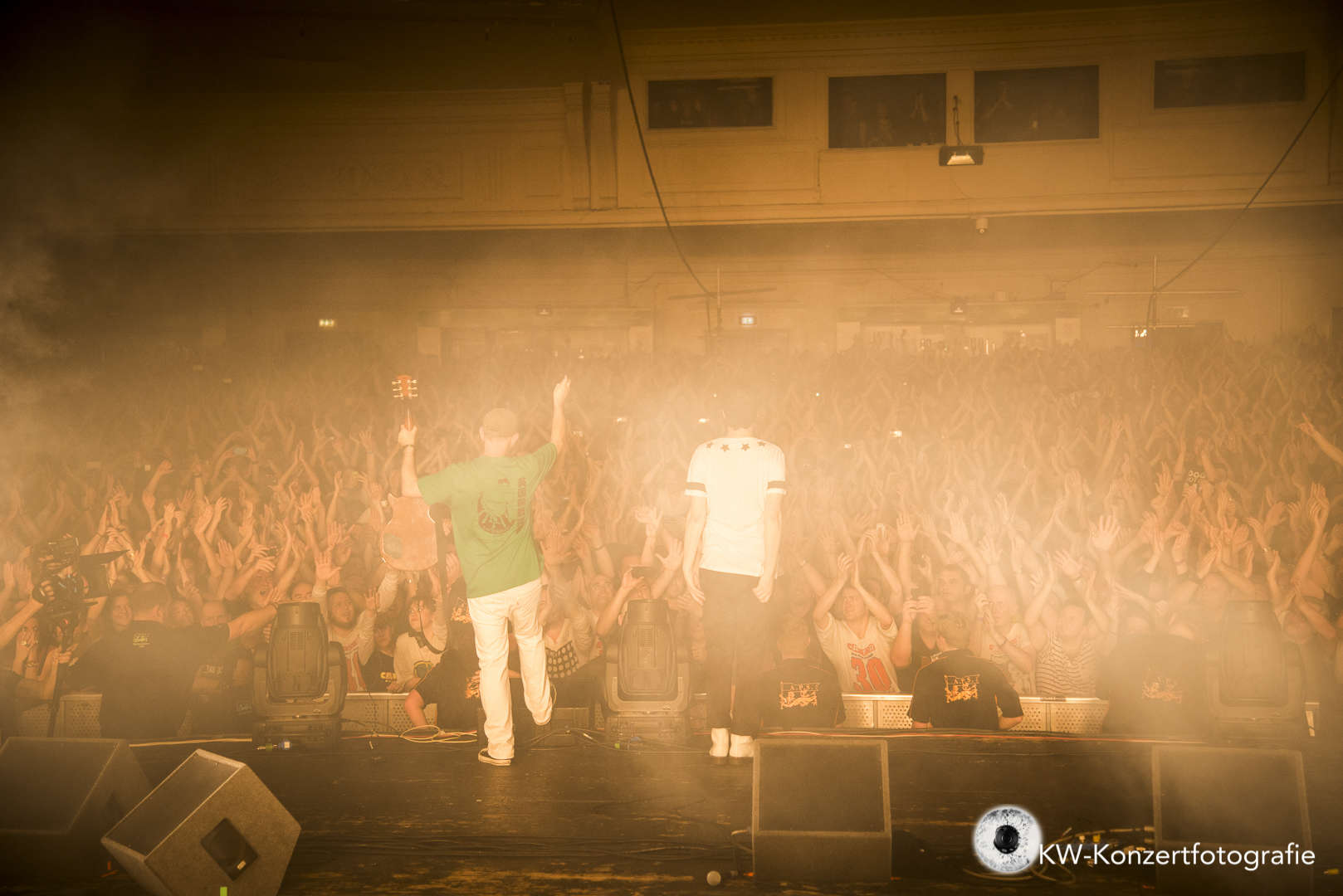 So this is it … the Final Comedown.

Here’s a few pictures to show what was going on at this final ever concert of one of the greatest 90s T-Shirt Bands that has ever been around. It was intense, amazing, hot and very emotional … Well just see for yourself …

and here’s the promised review …

Carter USM have managed to put on a show, that was way beyond my imagination. I knew it was going to be an intense and emotional night. But I guess we all got more than we paid for. Not only Jim Bob and Fruitbat are one of the best live acts, with the most epileptic light show I have ever seen, their fans are simply unbelievably devoted to the band. They came from all over the world to see their favourite band for the last time. And I’m afraid it is actually for real this time.

When they played their first pair of reunion gigs in 2007 “Jon Fat Beast” – who sadly passed away earlier this year – told us that it would be the last time ever … well, he was mistaken. It was such a success and so much fun, that it became an almost annual meeting in London. Every November I booked a flight and I only missed one Brixton gig ever since. And that wasn’t by choice. I was pretty angry about the fact I couldn’t go. But that’s freaking life for you, isn’t it.

I got there early that day, at about 3 in the afternoon, to take pictures at the soundcheck and generally say hi to everybody involved. I had to meet with Sam to sort out the photopass stuff as early as possible. I needed to know where I was allowed to run around and all that kind of stuff. That is a quite vital part of the job. Specially on a night like this. The security is on high alert, because of the huge, emotional crowd that was going to enter the Academy that night.

The lineup was the same as the night before at “the Shepherds Bush Empire” gig. The difference was the crowd that was already inside the venue. When “The Frank & Walters” opened the concert more than half of the more than 5000 Carter crazies must have found their way to the front of the stage, to sing along to the pop tunes. “The Franks” were clearly enjoying their time on the big stage.

By the time “The Sultans of Ping” played the front of house was almost fully packed and the first crowd surfers were pulled out by the stage security and there was some serious pogo dancing going on already.

I went backstage to check out my stuff and get ready for my 3 songs in the pit. My stuff was  parked in the “Fat Bastards” dressing room, so I was able to take a couple of very nice pictures of 13 more or less fat geezers getting ready for one final performance in memory of “Jon Fat Beast”. I almost ended up being one of them. It was a great laugh. So we all went on stage, with me staying behind to capture the moment. It was epic. When I ran towards the pit I was surprised by the massive amount of people actually being in there, taking pictures of the final ever Carter gig, and the fact that the crowd surfing had already started as if Jim and Les were already playing. The pressure on the people in the first row must have been immense. It was really awesome. I couldn’t move further in because the securities were so busy keeping everybody safe. Thanks for the good job lads! You had to pull out so many people and you didn’t drop a single one of them, no matter what. Thumbs up for the whole team, they were highly concentrated and well organised.

Back to Carter USM. Jim and Les had put together a all killers no fillers set list. From the first second on they were spot on and the crowd went completely crazy. The sound was brilliant, the songs were great and the crowd was singing so loud it almost drowned the PA system. Everyone seemed to be jumping up and down with out a break. It looked like a big blubbery moving mass. The flow of energy between the band and the audience was extreme. After the first three songs I simply stayed in the back of the stage to capture the atmosphere, not only because its special. I simply wasn’t able to get back inside carrying a camera without either losing the damn thing, breaking it or hurting someone. In other words, it was tight as fcuk. About half way through the set it was so hot and the humidity was so high, that the stage doors were soaking wet. I stood next to the mixing console soaking up the energy with a huge smile on my face. I really didn’t wanna miss a single note of this special gig.

For the first encore Jim and Les had a special treat up their sleeves. They got us a couple of actors dressed up as burglers to do an intro for “Glam Rock Cops” and four young dancers dressed up as police officers to catch them. I met them backstage and took a couple pictures. They were all very thrilled to be part of show.

For the second encore Jim was in for a treat. It was not only the final ever Carter gig, it was also his birthday. So the management gave him a birthday cake on stage resulting in massive choir of more than 5000 people singing Happy Birthday!

After the last tune was played it took minutes for Carter USM to wave good bye to everyone. the crowd surfers simply didn’t stop and it took the audience about 20 minutes to calm down. Many stayed, staring at the empty stage with tears in their eyes.

I can’t wait to see the DVD that was recorded on this night, which will hopefully be delivered before christmas.

So what’s next? There’s still a lot going on actually with both of them.

James Robert Morrison aka Jim Bob is still a writer. He has released several novels and there is more to come. He’s always been an outstanding and intelligent songwriter and so are his novels.

Les Carter aka Fruitbat is still playing with his band „Abdoujaparov“ and has released a new album a couple of months ago. And he is playing in several other bands, i. e. Keith TOTP His Minor UK Indie Celebrity All-Star Backing Band. So you see, there is plenty of stuff going on. This concert is the end of an era and the beginning of a new one.