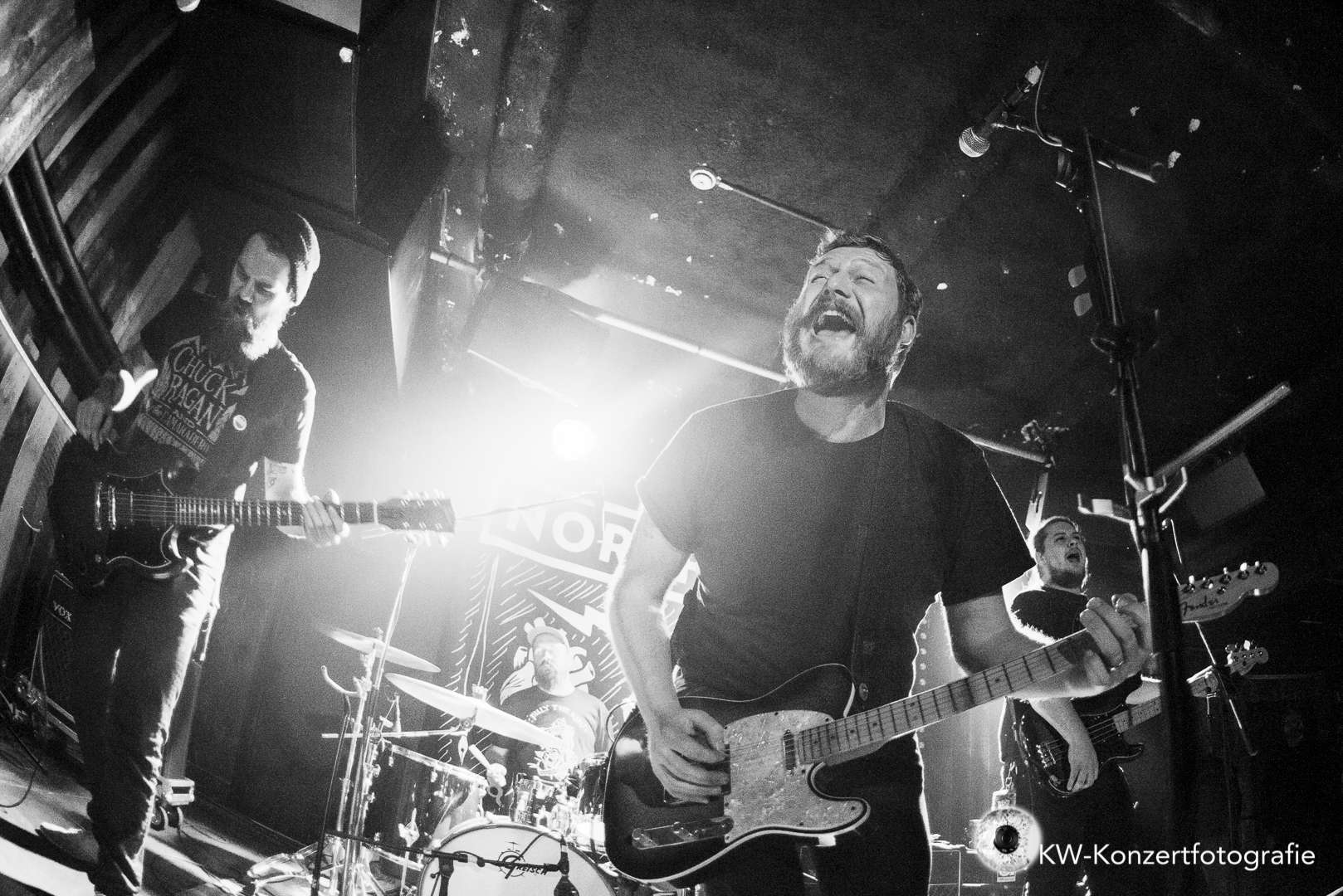 Having to sit in a shop until 8 pm is a pain in the ass but missing the first 15 minutes of a John Allen gig because of that can only be described with one word … shit … The curfew at the „Kleiner Donner“ seems to be pretty strict and so is the timetable. That is fine by me, we don’t want any hipster neighbours to close down the pub because they feel a bit disturbed by the music. First of all I have to say, that the „Kleiner Donner“ is an adorable live club. It’s small and not too expensive. The atmosphere is brilliant and so is the sound. Thumbs up for this little venue. Please keep it going and people, get your butts off the bloody couch and go to club! The television program sucks anyway and makes you dull in your skull. ( I don’t know if this makes sense, but at least it rhymes …) (edit: It’s 2018 now and the Kleiner Donner had to close because of the earlier mentioned hipster neighbours … darn!)

So obviously I can’t tell you anything about the first few songs that John Allen played. But he drew in quite a couple of fans, wich he managed to collect through playing various concerts all over Germany. He’s a hard working musician and really sings his guts out on stage no matter what. Even playing gigs and being on the road for days and nights with no sleep won’t stop him from singing to his fans. His fans love him for doing this. When you look around you can find many happy faces, fans singing along to every word he is singing. During „Blood Brothers“ the choir from the audience was singing so loud „What ever happens“ that he actually had to laugh.

With „Sophomore“ John has recorded a great second Album and I guess he’ll have some nice surprises up his sleeves for next year. I can’t wait to see what’s coming. His musical career is still young and Joh is an intelligent, creative, crazy and lovely guy. Just the way a singer songwriter has to be. I’ve had a great time listening to his songs and they gave me a good feeling throughout a huge part of this past year. next time you see him, you should go to take a look at his merch and say hi. maybe get yourself one of the Albums or even a T-Shirt.

It didn’t take long until „Northcote“ started their set. My friend Ara from „Lieblingstape“ had warned me, that I might like this band from Canada a lot. And she was absolutely right. Matt and his mates almost blew me away. There was so much music, harmonies and fun, that I was hardly able to listen to the lyrics. I will have to do that in a couple of days, listening to the album. I’m still pretty psyched. Great guys with beards and love for rock n roll. I had to buy there Album and I’m really impressed. The complex songs are grooving till the end and the cleverly arranged harmonies keep you excited and make you to listen even closer, you might miss something.

The show was divided in three parts. First couple of songs were performed by the full band. The middle part was played by Matt himself. He only picked someone out of the audience to play bit on the drums. You could see the joy on Matts face. He simply loved playing on this small stage. To round things off, John Allen got to play a song with him, too.

Unfortunately Northcote had to stop playing because of the curfew. But it was a great evening anyway. This band is definitely a hit. Great musicians playing great music.